Indemnity is often misunderstood when it comes to getting bonds, but surety bonds and indemnity go together. Indemnity means that one party must make another party whole for a financial loss. Surety bonds are written on the principle of indemnity. In plain terms, that means that if the surety bond company suffers a loss on a bond, they expect to be reimbursed (indemnified) from the indemnitors. Surety Bonds are underwritten with the assumption that there will be no losses. This makes surety a credit product like borrowing money from a lender. However, occasionally losses do occur and surety bond companies are entitled to seek reimbursement from any indemnitor on the indemnity agreement.

The written contract between a Principal and a Surety Bond Company is called a General Indemnity Agreement. It is often referred to as GIA for short. All surety bond companies have their own GIA and each is worded slightly different. However, through many years of case law, most have very similar language and terms. The GIA spells out the responsibilities of the surety bond company, the Principal and any additional indemnitors. The Principal on the bond will always be an indemnitor. In most cases that is the Corporation. The individual owners and others may be indemnitors as well. More on that below.

The General Indemnity Agreement also spells out the Principal’s responsibility once a claim has occurred. These responsibilities usually included assisting the surety during the claim, sharing the Principal’s books, systems and record keeping, resolving a valid claim and reimbursing the surety bond company for any damages they may have paid. This can include the surety bond company’s legal and accounting fees for investigating a claim as well.

What is Personal Indemnity?

Typically, a bond company will ask for personal indemnity for all shareholders owning 15% or more of the company stock. The percentage vary depending on the bond company and the person’s role within the company. For example, the company “President” may be asked to indemnify even if his/her ownership is less than 15%.

In most circumstances when personal indemnity is required, the indemnitor’s spouse (if applicable) will also be required to sign. Surety bond companies will rarely waive one spouses indemnity if it is required by the other spouse. They may be willing to exclude certain assets such as inheritances or sentimental assets with little value.

A Capital Retention Agreement is agreement between the Principal, Individual Indemnitors and the Surety Bond Company. It is put in place to prevent the Principal from making distributions or business decision that would decrease the net worth of a company below a certain threshold. A Capital Retention Agreement usually says something to the effect of no personal indemnity is in place if tangible net worth stays above a certain limit. There is nothing wrong with a capital retention agreement if you the Principal and Indemnitors understand it. However, most broker do not explain it well. In a claim situation, the company’s net worth threshold is usually breached, and personal indemnity may kick in.

A General Indemnity Agreement may also have Third-Party Indemnitors. A Third-Party Indemnitor is one that does not have an ownership stake in the corporation. This could be an individual or another Corporation. This is an uncommon circumstance and typically used when the Principle and Owners do not have the financial resources to qualify for bond credit on their own.

An example would be when company puts their balance sheet at risk for another. This is an extremely risky proposition. A third-party indemnitor is typically not privy to the obligation with the Obligee. Therefore, they have very little control in a claim situation and are often stuck writing a check for damages. Usually, another arrangement is preferable such as a joint venture. 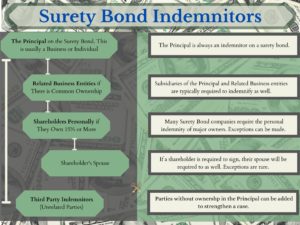 Surety is Not Insurance

Surety Bonds are often written by property casualty insurers and agents. This causes confusion with Principals who want to treat a surety bond claim like an insurance claim. Unfortunately, many find out the hard way that these are two very products. Insurance is underwritten with the anticipation of losses. When a claim occurs, the policyholder’s financial liability to the insurer is limited to their deductible and coinsurance.

On the other hand, because of indemnity, a Principal’s obligation to reimburse a surety bond company is only limited by their assets, contract, and law. A Principal is exposing their assets in return for the bond company providing surety bonds. Surety Bond Indemnity is widely misunderstood but a Principal should educate themselves on their obligations before accepting any bonds.

Contact Axcess Surety anytime for all your bond needs. You can also visit our Surety Bond FAQ page for many common questions.