Surety Bonds compared to Letters of Credit are often a decision that individuals and businesses must make. Here we compare the advantages and disadvantages of both products to satisfy an obligation

What Are Surety Bonds? 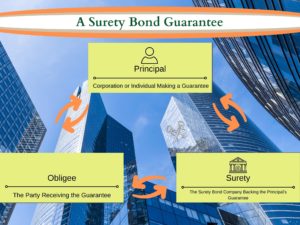 What are Letters of Credit?

Cost Comparison of Surety Bonds and Letters of Credit

Cost can be a major factor in determining whether someone should post an Irrevocable Letter of Credit or a Surety Bond.

Irrevocable Letter of Credit Costs are determined by the lender based on the credit and financial strength of the borrower. Generally, these guarantees cost between 0.5% - 3% depending on the market conditions. Under current market conditions, these ILOCs may be cheaper than surety bonds. However, if interest rates increase, the cost of Irrevocable Letters of Credit will increase with them.

Surety Bond Costs are determined by the type of obligation and are based on the credit and financial strength of the Principal also. Surety Bonds also generally cost between 0.5% and 3% of the guarantee amount. Surety Bond Costs can also change with market cycles. However, Surety Bond Rates tend to be more stable than interest rates.

Underwriting for surety bond obligation over $500,000 is very similar to obtaining a bank letter of credit. A Surety Bond Company may expect financial statements, a credit report and other underwriting information. You can read more about how Construction Surety Bonds are priced here.

However, Commercial Surety Bonds such as License and Permit Bonds, and Contract Surety Bonds under $500,000 can often be purchased quickly with little underwriting information. These bonds may require a personal credit report on the owner(s) but can be obtained almost instantly without going through an underwriter or loan committee.

Claims in Surety Bonds Compared to Letters of Credit

An Irrevocable Letter of Credit is paid at the demand of the named person or entity. This is a large benefit to the note holder as they can receive payment simply by calling the note. Unfortunately, this is a disadvantage to the borrower. The borrower has virtually no defense if they believe a claim is unwarranted. Their only means of recovery may be expensive litigation.

Surety Bond claims must be investigated by experienced claim personnel before the bond will pay the Obligee. From an Obligee perspective, this is less favorable as they may want the funds immediately. However, this is a huge positive for the Principal. It helps ensure that only valid claims are paid. This is important since the Principal would have to reimburse the surety bond company for any paid claims under the indemnity agreement.

Opportunity Cost For Surety Bonds Compared to Letters of Credit

ILOCs do carry opportunity costs when it comes to additional borrowing ability. Having an outstanding Irrevocable Letter of Credit with a lender will generally decrease the borrower's ability to obtain credit that or other lenders. This is because lenders’ must assume the letter of credit could be drawn on at any time.

This may not be a problem if other funds or borrowing is not needed. However, a borrower may need to borrow credit for other purposes to run and grow their business and having an ILOC in place may reduce that ability.

Surety Bonds generally do not reduce a Principal’s ability to borrow money or obtain additional surety bond credit on commercial surety obligations such as License and Permit Bonds. This can be a big advantage over letters of credit.

For example, many states require either a license bond, cash or irrevocable letter of credit to be in place to operate. A business operating in many different states would have to post many different letters of credit. These amounts can add up and reduce the business’ borrowing ability. Posting License Bond instead, frees up business’ resources.

An exception is Contract Surety Bonds, such as Performance Bonds and Payment Bonds. These surety bonds will reduce a Principal’s surety bond credit by a corresponding amount. These construction bonds may also reduce a Principal’s borrowing ability with a lender. Some lenders exclude contract receivables from a borrower’s borrowing base, if the contract has a performance bond or payment bond in place.

Still, providing an Irrevocable Letter of Credit is almost never a good idea on construction projects and surety is the better option. 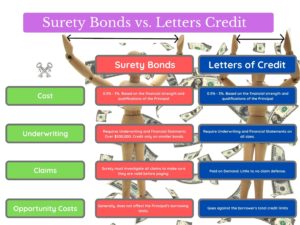 Comparing Surety Bonds to Letters of Credit is not always an easy choice for businesses or individuals. Some contracts require only an Irrevocable Letter of Credit. However, if an option is given, Surety Bonds are usually a superior choice for the reasons listed above.

Axcess Surety has experts waiting to answer any questions that business and individuals may have regarding these choices. Contact us anytime. You may also visit our Surety Bond FAQ page some commonly asked questions.