Surety bonds are often required for projects on Native American Lands. These projects can present a challenge to contractors, and surety bond companies. Learn more about the risks associated with these projects and how to successfully obtain performance and payment bonds for them. 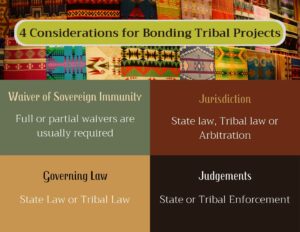 Sovereign Immunity is a key issue for all parties looking to perform work on Tribal Lands. A Sovereign entity is one that is free to rule and govern itself without interference from outside parties. Sovereign Immunity is a legal definition where a government entity cannot be sued without its consent. Native American lands in the United States are considered Sovereign nations with certain limitations. They have power over their own affairs, are exempt from State laws, and cannot be sued without their consent or waiver of Sovereign Immunity. However, their Sovereignty is granted by The U.S. Federal Government and could be modified, revoked, or limited by a legislative act.

Tribal Immunity can create problems for surety bond companies and non tribal contractors performing work on Tribal Lands. The contractor and their surety may have little recourse if a dispute arises with the Tribal Owner. Case law is clear that without an express waiver of a Tribal Nation’s Sovereign Immunity, they cannot be sued in State, Federal or Tribal Courts. Most surety bond companies will ask for a Waiver of Sovereign Immunity.

Whether a Tribe can waive sovereign immunity, and who can waive it are usually expressed in the Tribe’s Constitution or Charter. It is important to obtain a copy of the agreement or resolution allowing the waiver. In Memphis Biofuels Vs. Chickasaw Nation Industries, Inc., Memphis Biofuels, did receive a Waiver of Sovereign Indemnity. However, the Tribe’s charter required that Board approval was required to Waive Sovereign Immunity and the Board did not approve it. Therefore, the court found that the Waiver of Sovereign Immunity was not enforceable.

The Limits of Waiving of Sovereign Immunity

Almost all surety bond companies will want at least a limited waiver of sovereign immunity. However, that may not be enough for some bonds companies and contractors. As previously mentioned, waiving sovereign immunity allows the Tribe to be sued but it does not specify the law or jurisdiction to be followed. Disputes would likely end up in the Tribal court system with Tribal laws and customs being followed.

The United States currently recognizes 574 Native American Tribes. Many of these Tribes have very sophisticated laws and court systems. Over time, surety bond companies have become more comfortable with larger Tribal Nations and their laws through experience. This makes providing performance bonds and payment bonds on these projects much easier.

However, with smaller Tribal Nations, the bond companies may not have as much experience and familiarity with their court system. Also, the Tribal court and laws may not be as experienced as some of the larger Tribes. This uncertainty creates risk for the contractor and surety. The bond company will be concerned that if a dispute arises and it is tried in Tribal Court, they are unlikely to get a fair outcome as the Tribe is the Defendant, Judge and Jury. This presents a risk to them and their Principal contractor.

Because of the challenges listed above, some surety bond companies may request the jurisdiction of disputes to be held in State Courts. Some Tribes may be reluctant to agree to this venue. Arbitration is usually a solution that can be agreeable to both parties. Again, this should be spelled out in the contract and agreed to by all parties.

Another complicating factor for bonding projects on Native American land is judgements. If parties agree to Arbitration, they should also agree to where judgments are enforced. Because of jurisdiction issues, parties from either side may find it challenging to collect judgments. One way to get around this is by escrow agreements or through Irrevocable Letters of Credit.

Subcontractors and Material Suppliers should be aware that The Miller Act does not apply to construction projects on Tribal Land. Additionally, Mechanic’s Liens cannot be filed so there is a risk of non payment.

Other Important Considerations for Bonding Construction Projects on Tribal Land

TERO stands for Tribal Employment Rights Office. Many projects on Tribal lands specify a minimum amount of employment that must be used by labor from the Tribe. It is important for outside contractors to understand if they can meet this goal, at what cost and what production levels to successfully complete the project.

As Sovereign Entities, Tribes are able to make their own laws and codes. Contractors performing work on Tribal lands should understand these codes and not assume they are the same as building codes in other areas.

Other Tips for Successfully Bonding a Tribal Project

Our experience is that most projects for Tribal owners go extremely well and without issue to contractors or surety bond companies. However, disputes are part of construction whether the project is on Tribal or non-Tribal land. In fact, the average cost of a construction dispute globally has risen to $52.6 million so it is always better to mitigate risk on the front end. Understanding the Tribe’s laws and customs before bidding a project is always a good idea. Meeting with leadership and labor to understand their goals and vision should be a top priority. Bonding and building a successful project is the goal of all parties.