Performance Bond Claims should be avoided at all costs. These claims can take a contractor out of business and/or make it very difficult to get bonding in the future. For contractors that do find themselves in a performance bond claim, the information below may be helpful.

What Is A Performance Bond?

Performance bonds guarantee that a project will be completed according to the terms and price of the bonded contract. They are a type of contract surety bond and a three party agreement between a Principal, Obligee and Surety. The Principal is the Contractor whose work is being guaranteed. The Obligee is the Owner, Developer or Upstream Contractor who is receiving the benefit of the guarantee. The Surety is the third party bond company who is guaranteeing the Contractor’s performance of the contract. You can find more information on performance bonds here.

What is a Performance Bond Claim?

Review the Contract and Bond Form

Who Can Make a Claim Against the Performance Bond

Termination Under the Contract

As discussed, each contract and bond form can be unique, but most require four common elements for a valid performance bond claim: 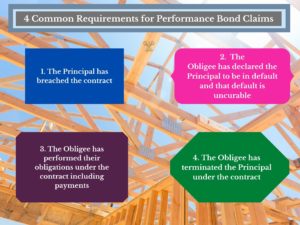 Once a surety receives a bond claim from an Obligee on the bond, they must investigate to see if the claim has merit. This includes reviewing the contract, bond forms, laws and statutes and gathering information from the contractor (Principal). This is often a time-consuming process for the Principal and many contractors push back against gathering this information for the surety. However, the General Indemnity Agreement the contractor signed to get bonds, gives the surety access to the contractor’s files and records. Any push back only slows down the process. The contractor should expect to have frequent contact with the surety’s claim staff throughout the process. Surety bond companies are not contractors. Often, they will get third party consultants involved to help in this process.

The surety must investigate the performance bond claim fairly and timely. They must review all available information to determine if a legitimate default and termination has taken place. The surety does not want to proceed with an invalid claim. Doing so, may provide a defense for the Principal and indemnitors so that they would not have to reimburse the Surety Bond Company for costs incurred.

Unfortunately, this is a valid complaint that some Obligees have against performance bonds. The time it takes to investigate a performance bond claim can cause project delays and costs. To combat this, some forward thinking Performance Bond Companies have started offering bond forms that provide some funds to the Principal upfront while the investigation is conducted.

What Could Be Covered Under a Performance Bond Claim?

Keep in mind that this is for performance bond claims. Performance bonds are often written along with a payment bond and other claims could have coverage under that bond.

What Are Defenses to a Performance Bond Claim?

A surety bond company gets to “step into the Principal’s shoes”. That means they do have valid defenses against performance bond claims in these scenarios:

Depending on the circumstances, the surety could be released of all liability or only the liability that relates to the damage of each defense.

Once the surety has investigated the claim, they must decide the best course of action. Some performance bond forms and contracts specify which option the surety must take. Most contracts and bond forms are silent and give the surety one of the following options: 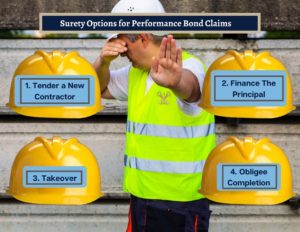 Financing the Principal is exactly what it sounds like. The surety company supports the contractor to cure their default on the project and keep them from being terminated. This support can be direct, such as lending the Principal money, or it can be indirect such as guaranteeing bank loans or even in the form of extending more surety credit despite the default. For the surety to finance a Principal, a surety must absolutely believe that the Principal is a very capable company that can turn things around. Normally, this occurs when the surety has exposure on multiple bonded projects and the surety believes the principal can turn things around.

There are advantages and disadvantages to the surety for financing a Principal. These include the following:

Advantages of Financing a Principal:

Disadvantages of Financing a Principal:

Contractors often incorrectly believe that the surety will finance them. They believe the surety has an interest in providing cash to keep their operations running and completing their work. Surety Bond Companies almost never finance contractors. Doing so opens them up to additional liability and unknown risks. When surety bond companies do provide financing, their interests are in winding down their liability and not in keeping the contractor in business.

For this reason, contractors would be wise to seek out all other lending solutions before asking the surety to finance them. With SBA backed loans, peer to peer lending, receivable financing and equipment loans, there are many places to look for lending before even considering these options. Although these may have high rates or tough terms, they provide contractors a chance to  continue operations, keep their business running, and maintain control. Financing from surety bond companies is rare and when it happens, the surety usually takes over and puts the contractor out business.

Obligee Completion (Do Nothing Approach)

Obligee Completion is often referred to as “The Do-Nothing Approach”. The surety chooses to let the Obligee complete the project. There are valid reasons why a surety may do this. They may feel that the Principal has credible defense to the default such as nonpayment by the Obligee. They could also choose this option if the uncompleted portion of work and damages were close to or exceeding the penal sum of the bond.

Contractors involved in a performance bond claim should be aware of the surety’s subrogation rights. When a surety gets involved to resolve a performance bond claim, they also get the right of subrogation against the Principal. That means they get to take over the contractual benefits of the Obligee, suppliers and other parties. Normally surety bond companies use this right to get access to contract proceeds. This often plays out against lenders when a contractor gets into financial trouble. Lenders and sureties routinely fight over access to a contractor’s assets such as receivables. However, case law has routinely sided with surety bond companies in these situations. This holds true against other parties as well such as bankruptcy trustees.

Performance Bonds are written on the Principal of Indemnity. That means that if a contractor has a performance bond claim, the surety will seek reimbursement for all costs associated with investigating the claim and paying or completing the project. These obligations are spelled out in the General Indemnity Agreement (GIA) that contractors sign before they can get performance bonds.

It is very important to review this document when you are involved in a performance bond claim. The GIA outlines your responsibilities to the bond company. There are usually requirements to cooperate and provide timely information. The GIA will also spell out who is an indemnitor on the performance bond. The construction company will always be an indemnitor. There could also be related companies, unrelated companies, owners and their spouses or even third-party indemnitors. Generally, these indemnitors are joint and several which means the surety can seek reimbursement from any or all of them. Additionally, the GIA usually has a collateral provision that requires indemnitors to post collateral in favor of the surety if a claim arises.

Every year when surety bond companies investigate what causes most of their performance bond claims, poor internal controls are listed at the top. Many contractors think their systems are sufficient and most are wrong. Construction is a very risky, cash intensive business. Contractors should have systems in place that allows them to see accurate reports on their cash, financial position, job costs, ect. at all times. At the very least this should be reviewed monthly. Project losses, profit fades and billing issues should be addressed immediately. Contractors without these controls often discover problems only after it is too late.

A second part of internal controls is checks and balances in your estimating department. Make sure projects over a certain dollar amount are checked and rechecked by more than one person. It only takes one bad estimate to put you into a performance bond claim and possibly put the company out of business.

There is never a good reason to perform work without a signed change order. Contractors are always confident that they will get this signed. It is much more difficult to get these change orders signed after the work has been done and costs have been incurred. Unapproved change orders are a significant reason for performance bond claims.

By having better practices for just these items, contractors can significantly reduce their chances of ever getting into a performance bond claim.

Latest posts by Josh Carson (see all)
FacebookTweetPinLinkedInEmail
Share this ArticleLike this article? Email it to a friend!
Email sent!